The last day of the opening list of three exercises to start the training camp, before the start of the exhibition season with games tomorrow and Monday. Jared Shafran will be in San Jose for the season opener and I will be in Vegas on Monday for game two. Expect to see a split squad for these games, giving individuals the opportunity to showcase themselves in the show’s work. With seven pre-season games available, the Kings have plenty of time to give veterans what they need from the exhibition season, as well as giving younger players the opportunity to push for rosters and boost their roles early in the season.

Today, we have one last look at the same schedule we’ve seen in the past two days, starting at 10am today with the first set on the ice.

Here’s how the Kings align this morning. As you’ll see, some streaks and pairs stayed consistent over the first three days of camp, while others included constant changes. The top streak with Viala, Copetar and Kembe has been maintained as is the potential bottom six, with Ivalo/Biefield/Kaliev and Limieux/Lizot/Grundstrom playing together every day so far.

The second streak was in flux, with injuries first to Victor Arvidson and now to Philippe Danault, who missed yesterday’s skiing due to a “muscular problem” and is due to ski with Group C today. Per Todd McLellan, there’s no long-term reason to worry about Danault. Today, that line will feature Rasmus Kopari in the middle and Gabi Velardi on the right, skiing alongside Trevor Moore’s lone boater on the left. Today is Velardi’s first chance to skate on that line as the Kings prepare to open the season without Arvidsson, although that’s not certain. He will provide an update later today on whether or not Danault will return to the ice. At this point in the camp, there is no sense in bringing a player back too quickly, so we will consider this a situation to be handled carefully and properly until we are notified otherwise.

Here’s the alignment for the third day of camp – 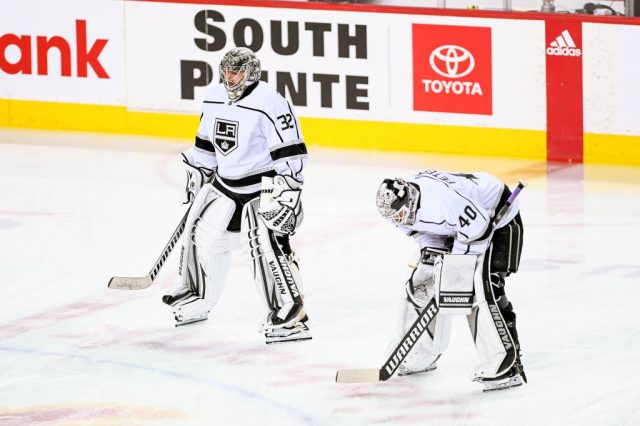 “We have two goalkeepers that we think will play and fight for the icy time and start, and we believe in them.”

That was Todd McClellan detailing his broad overview of the goal-oriented attitude. Despite talk of camp battles, new roles, possible rework and restructuring in certain locations, the point of aim is likely to remain the status quo. While Jonathan Quick seized the upper hand in April and at Postseason in May, there was an equally defined split last season between him and Cal Petersen. At times, Quick was the main man putting together a good season. Petersen had his moments too, scoring 20 career victories, which was significant to him and if you ask his tandem partner, that’s the only case that matters anyway.

A few words from each of the first days of boot camp.

When transitioning from summer skiing to camping practices and organized brawls

Petersen – Yeah, I mean there’s always some rust to get rid of with this, because even when you fight in the summer, guys don’t really shoot from the point, you don’t really have to try to fight through corpses that much. There’s a little bit that goes into getting your readings and timing back in, and knowing where everyone is on the ice, there’s that extra element. The great thing about this format is that you can get rid of that right away and get back into the game from day one. I think that helped last year and all the years that Todd was here and I think it will only help this year.

Quick to form a more cohesive group with goalkeepers, and being less in the camp
This is a normal thing I grew up with, there are only two goalkeepers in the team who are straight from youth hockey. There’s obviously a level of respect for each other, just because of the situation we’re in and we know the ups and downs and the things we have to deal with on a daily basis are a little different than everyone else, but at the same time, you root for each other and you want to see guys do well .

Petersen talks about whether he feels any extra pressure this season in the first year of his new contract
No, I mean the deal was put in place last year and I wouldn’t call it a double-edged sword, but that’s just part of playing in the NHL and the chance you get. I always say pressure is a privilege and I want to be an essential part of this team. I was glad they committed to me and I want to reciprocate that commitment and level up, but to me, these are all just external things that you can’t really play in the game. I just focus on this locker room and this ice and everything else will take care of itself.

Quick, Petersen and the Kings hit the ice here soon in El Segundo! Coverage to follow later today with a look back at Day 3 of bootcamp, as well as a look at the off-season big-ticket acquisition of Kevin Fiala, who has garnered great reviews from teammates and coaches alike during his two days of camp.